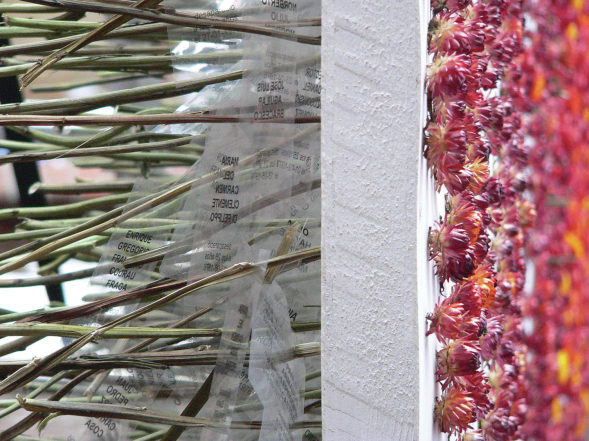 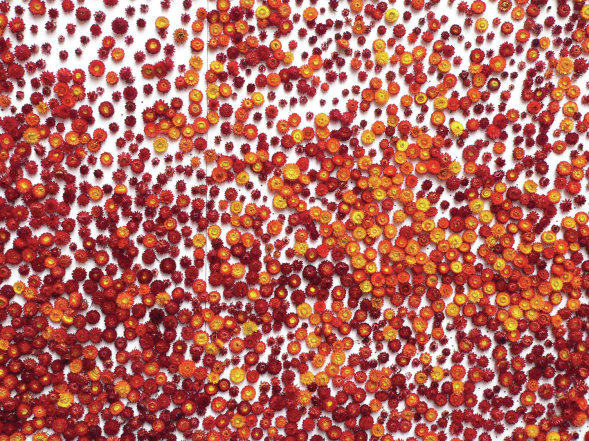 This project is a cooperation between Marula Di Como and Silvina Der Meguerditchian.

The dictatorship that ruled Argentina between 1976 and 1983 conducted an unprecedented level of state crime: the forced disappearance of thousands of people whose deaths were never officially recognised. Estimates put the number of people who disappeared at 30,000 – they are missing, without a grave, and their only presence is the extent to which we can evoke their memory.

The installation ‘Siempreviva’ offered a space of remembrance to the disappeared in the heart of Berlin, a city with a history marked by state terror and murder.
The siemprevivas, or everlasting  owers, are  owers that cannot wither. Neither dead nor alive, they maintain the same state of suspension between life and death in which the dictatorship wan- ted to con ne the disappeared. In contrast to historical contexts in which it is possible to speak of a post-, an afterlife of the painful events, disappearance haunts society in ways that challenge the ordered course of history and disjoint time.

In silence, these  owers speak in their own language of an open wound in Argentinian history. Like memory itself, this installation was located within the tension that exists between the collective and the individual. The installation confronted visitors with a sea of  owers – but each  ower was unique and different, as were the disappeared. They included workers and intellectuals, men and women, children and old people. Most of them, however, were young: state terrorism in Argentina was primarily directed against an entire generation.
The stem of each of the  owers bears a name from this history. These brief epitaphs, drawn in detail, deserve particular attention: writing each name on the labels by hand paid further homage to those forcefully absented. Rather than copying the names of the disappeared from existing lists, which are contaminated with the language of bureaucracy, the artists designed each of the labels individually, inscribing them with the circumstances surrounding each disappearance. The slow, meticulous process of transcrib- ing the names epitomises the measure of commitment and affect pervading Siempreviva. With this loving gesture, the artists were able to avoid the disjointed ramblings of a database and, instead, create an individual narrative for each of the disappeared – and lend them a history as a place of rest.
The backdrop provided by the remnants of the cloister was particularly fitting for an ephemeral installation such as this: although the ruins suggest persistence, they also stress the fra- gility of memory.

The installation was exposed to the elements and the resulting deterioration. As with other works that underline the volatility of memory, these flowers confront us with an ethical demand: remember, even when this work is gone.

If, over the course of centuries, a stone’s existence is as fleeting as that of a flower, it is only through active recollection that these memories can be kept alive, long after the elements have weathered any semblance of their presence.