Carpet series - The texture of identity

Fragment of a text written by Marianne Hirsch about The texture of identity
"Der-Merguerditchian, however, rejects identitarian politics and aesthetics, ethno-nationalism and its monumentality. Her “Carpet Series: The Texture of Identity” is a series of crocheted collages that embed archival studio photographs, stamps and ID cards into tapestries, quilts, carpets and maps.  These are objects that anyone would take along into exile, objects that not only evoke the past but that were literally touched by those who were murdered and those who survived. The images are blown up, printed on paper and then laminated and crocheted together with colored yarn. Linking pre-genocide family portraits, wedding photos, individual and group pictures to one another, the artist creates “carpets” that are then hung on walls or suspended so that gallery visitors can walk through them, seeing and feeling them from both sides.(...) “The Texture of Identity” underscores memory’s textures and affects. By inviting touch and opening a space where we allow ourselves to be touched in return,  “The Texture

of Identity” underscores memory’s textures and affects, not only loss and nostalgic longing but recuperation and repair. Marie-Aude Baronian identifies a “mémoire texturée” emerging from ancestral Armenian weaving practices, reconfigured in exilic space of loss and forgetting. But these practices also respond to what Baronian sees as the “archival desire” of diasporic Armenian artists who aim to make a phantom past newly “visible.”

In Silvina's Der-Meguerditchian's crochet collages the memory of the expulsion and massacre of the Armenians becomes the objects of artistic debate. The tapestry Made in Turkey II draws up an imaginary map of Istanbul. A satellite picture of Istanbul today is used, but is incomplet: the cityscape is has empty spaces which appear as ornamental elements due to the artistic crochet technique. Around the tapestry, documentary photographs shows scens from Armenian everyday life in the streets and squares from Istanbul at the beginning of the 20th century. Between pictures laminated in individual feelds, the artis has placed a repetitive decorative element of harrowing symbolisme: a satandard pencil rubber- with the inscription "made in Turkey". | Barbara Höffer﻿ 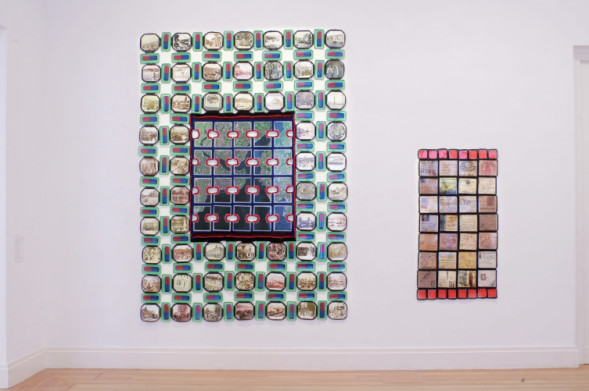 Made in Turkey II and Flight carpet in the exhibition Fokus Istanbul, Martin Gropius Bau - Berlin/2005

Passport photos look you straight in the eye. Faces of people that have long been dead. Proof that they once lived is found in work and residence permits, stamps and entries, emblems and lettering. The names and words in delicate handwriting or print display a graphic rhythm which can compete on even terms with the pictures. Anyone who delves into the world of the documents is profoundly moved and simultaneously feels kept at a distance. Silvina Der-Meguerditchian, born in Buenos Aires in 1967, enlarged the identity papers and encapsulated the individual pages in plastic foil. This brings them into such sharp focus that the viewer has the impression of seeing into the hearts of the deceased and reading from their lives as if they were an open book. But at the same time the artist's rearrangement seems to put the past out of reach, sealed and sequestered forever.

In regarding the representations of concrete political events, one cannot avoid exploring one's own destiny. Beyond the horrors which are embedded like philosophical treasures in the fabric of this art, it makes another statement, namely that we are all connected by the fine threads of life and that the constantly emerging present is made up of a dense network of relationships. It is not a matter of chance that in an identification document, greatly magnified by Silvina Der-Meguerditchian the forgery-proof watermark filaments remind us of the crocheting she uses and takes up where the laminated components of other works leave off. No matter what happens, this art teaches us something -- we make something out of it ourselves, and our creativity influences us in return.﻿﻿

The flickering of meanings between proximity and distance, individual and society, past and present, challenges the viewer of Silvina Der-Meguerditchian's work again and again and inspires inexhaustible fascination. The artist invests a piece of her own family history, the trauma of her grandparents, in her creations. They had to flee the massacres perpetrated by the Turks on the Armenian minority in 1914-15 and found their way via Paris to Argentina. Most families would resort to repression as a defense mechanism to handle such catastrophic ruptures. But this strategy does not allow descendants to break the evil spell. The atrocity haunts them permanently. Silvina Der-Meguerditchian had to cope with this specter as a representative of the third generation. She attended an Armenian school in Spanish-speaking Buenos Aires and at some point began to ask why she was not in Armenia and to explore the very concept of "Armenia".

Silvina Der-Meguerditchian deals with the trauma of expulsion by calling it by name and making it the focus of her art. She does not accuse, she experiences no hatred, on the contrary. Being able finally to define what once happened gives her a way of building a bridge from the victims to the perpetrators over an impossible gulf. Her tools are authentic materials such as fingerprints, DNA structures and city maps as well as certain traditional forms like alignment and repetition of individual elements which contrast with others. For instance, she arrays the identity papers of her grandparents and their fellow refugees, many of whom died during their flight, into a large hanging collage, a kind of image-word quilt, weaving the individual patches together like the ornamental fields of a "genuine" Oriental rug , with finely crocheted textile joints, framed at the top and the bottom by a crimson border. Normal Central Europeans, who thoughtlessly trudge across their living room floor covering every day, are not only reminded of a repressed World War I political event They are also made aware of the fact that the apparently exchangeable and purely esthetic decorative features of Oriental rugs once had significance and were used to portray things like the gardens of paradise, architectural structures symbolizing protection and safety of praying believers, or hunting scenes.

However, Silvina Der-Meguerditchian does not depict paradise by a long shot, despite her splurges of intensive coloration. You are bound to realize this if you penetrate below the initially innocuous surface. She arranged a second, graphic "quilt" as a cross and created a third -- in contrast to the collage with the very personal credentials -- to conjure up an image of the deported people's lost homeland, using photographs of streets and squares in Turkey. Sunlit, dusty, a tree here and there between the buildings. The everyday motifs make it all appear almost trivial. But between the pictures, laminated in individual fields, the artist inserted a repetitive "element of decoration" with stunning symbolism, a large, elongated eraser with that says "Made in Turkey" and proceeds to rub out the stations of life belonging to those who had to flee.

In the meantime, Silvina Der-Meguerditchian has added a third dimension to the two cultures she grew up in - the Argentine (which has absorbed similar historical disasters) and the Armenian. Since the late 1980s she has lived in the formerly divided city of Berlin, still an unhealed wound in the psyches of its citizens. How long will this trauma continue to plague German souls? Far from displaying a one-track mind dwelling only on the Armenian ordeal, she tackles the festering sores of history wherever she encounters them. The many-faceted artist has compiled similar collages from the fates of German Iron Curtain refugees. Again sober passport photos of people who defected out of desperation. At first glance, again an objective juxtaposition of facts which knock the wind out of you if you look at them long enough. Again the fields of writing that repeat themselves as if they were mere decoration although these elements are required to clarify what happened to many East Germans ("...managed to flee in the trunk of a car"). In general, one should not underestimate the role words play in Silvina Der-Meguerditchian's art in presenting form and fact. For instance, when she places terms of repressing and forgetting as a compact verbal block between pictures, or when she lists the numerous words for killing in a painfully austere inventory.